On Thursday, 10 May 2018, students of the University of Economics, Prague had an opportunity to join a discussion with Commissioner Věra Jourová on The fake news phenomenon and data leaks from social networks. The central topic of the debate was the level of personal data protection and privacy and its current – rather neglected – perception in the Czech Republic. Nevertheless, according to the Commissioner, responsibility is not laid solely on Member States but also “every individual who must take care of its privacy and must approach dissemination of his or her own data responsibly.”

The misuse of Cambridge Analytica’s data which could impact 2.7 million Facebook users from the EU clearly demonstrates our vulnerability. “Especially in the Czech Republic where, according to the Eurobarometer, citizens draw up to 55% of information from online sources, we are exposed to a great risk of manipulation,” said the Commissioner. It is now in Member States’ hands to uphold preparation and adoption of a regulation to prevent possible data misuse and swaying election results. The steps should lead to strengthening the legitimacy of future election results and maintaining confidence in democratic institutions. The European Commission also negotiates with transnational companies about withdrawing the so-called illegal content on the Internet which already must be removed within 24 hours or in one hour in case of hate speech.

The Commissioner elaborated on the topic by briefly introducing a new measure that is being drafted by the European Commission – A Code of Practice on Disinformation which should be published by July 2018. The declining variety of today’s media environment as well as the safety of journalists, which we have unfortunately witnessed in neighbouring countries over the past years, also do not contribute to the development of well-informed societies and media literacy.

The attendees were particularly interested in distinguishing disinformation properly in case of the encounter or in the way of teaching critical thinking to pupils, students and the general public. Another question concentrated on the very intent of spreading fake news and whether they really are a new phenomenon. The Commissioner reminded that the so-called fake news had been ever-present (and she had become a target of them as well), however, the current level of information overload we face is limiting our critical approach towards content consumption increasingly. “Censorship and an establishment of the Ministry of Truth is by no means a solution,” said Věra Jourová, referring to the George Orwell’s novel 1984, emphasising that ethics and social responsibility of all subjects on the Internet and in the public sphere have to be strengthened. 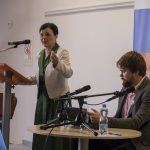 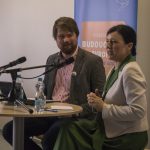