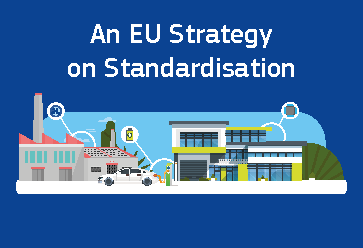 Standards have played a leading role in creating the EU Single Market and supporting European competitiveness. They help manufacturers to ensure the interoperability of products and services, reduce costs, improve safety and foster innovation. The EU Standardisation Strategy aims to respond to the need for Europe to strengthen the strategic role standards play in the Single and the global market. It sets the pathway to better support Europe’s competitiveness and strategic autonomy, facilitate the dissemination of European innovations and ensure that European and international standards are in line with the EU’s interests and values. Geostrategic importance of standardisation for the continent was emphasised, too. In sum, changes should solve some of the most pressing problems standard-making is currently facing.

Last year, 17 EU countries pointed to the lengthy delays in the approval of new European standards. They warned the Commission that companies might start using international standards instead, ‘leaving the European system at risk of collapse’, if the problem was not solved. Governments called on the Commission to provide greater flexibility for European Standardisation Organisations (ESOs), including clear criteria for evaluation of standards, and making their citation in the EU Official Journal quicker. The Commission will need to tread carefully and strike the right balance between speed and quality.

Consumers, small businesses, environmental and social organisations are all given a seat at the table – Europe is one of the few places in the world where this is the case. With the new strategy, we expect the Commission to seek even broader participation of concerned organisations at the international level and that input from civil society organisations will not be limited.

As a global standard-setter, Europe can get a competitive edge in new technologies such as artificial intelligence and blockchain. This also applies for areas critical to the green transition, such as the rules governing battery manufacturing or the global trade of used plastics. Best practices exported by the EU and increased synergies in global value chains enhance trade flows and opportunities for European businesses to scale up their activities.

The EU needs a fast, responsive, efficient and inclusive standardisation system to meet its objectives for the digital and green transition of the EU economy, and to strengthen the resilience and the functioning of the Single market.